Pop On Over for a Yorkie

As it turns out, Popovers and Yorkshire Puddings are pretty much the same thing. Popovers are usually made with butter and Yorkshire Puddings are traditionally made with beef or lamb drippings. No real skill is required to make popovers. The success depends on proper baking. The batter is thin – about as thick as cream. In a hot oven, the batter forms steam causing the flour, milk and egg mixture to expand and form nearly hollow shells. The Popovers have to continue to bake to become rigid and to prevent collapse because the steam condenses on cooling. While it’s tempting to peek, the oven door should never, ever be opened during baking.

Last month, Vince and I attended a birthday dinner for a friend. Popovers were on the menu. They had been baked ahead of time and reheated for the meal. They were delicious! The hostess served them with a really yummy butter. I was hooked immediately. So, of course, I was determined to take a shot at baking some myself. Popovers aren’t exactly a southern staple. I don’t recall ever eating one before. But, as fate would have it, Vince had bought me a Popover pan (about a zillion years ago), and I, for some crazy reason, actually remembered where I had put it. I pulled the pan out of the depths of the cabinets and put that thing to work. Not knowing anything about Popovers, I decided to consult my dear childhood friend from Wilson, Brad Akerman, who is now an interior designer in Indianapolis, and is also a fabulous cook. Brad makes Yorkshire Puddings (he calls them “Yorkies”) every year for Christmas and swears that his recipe has “proven to be fail proof.” I like recipes like that. I also consulted my favorite proper Englishman, Martin McFie, for his take on the correct way to serve Yorkshire Puddings. What began as an idea for a column has blossomed into an entire Popover/Yorkie lesson. Let me share my findings. First of all, I checked the recipe for Popovers in my 1961 edition of The New York Times Cookbook. I used it to make my first-ever batch. The recipe was quick and easy and the Popovers were yummy and pretty and I was pleased. Still, the Popovers weren’t as large as I had hoped. So, I read multiple recipes from top chefs and tricks from home cooks and eventually came up with a recipe and some secrets that gave me the huge Popovers that I wanted. The main trick is to never open the door while they’re cooking. If you do, they’ll fall right before your eyes. It’s actually quite fun to watch the Popovers rise while they’re baking. Also, if you use room temperature milk and eggs, allow your batter to rest for about 15 minutes (Martin says resting the batter makes no difference, but I’m sticking to my method) and pour the batter into a hot preheated pan, the Popovers will rise higher. Martin says that in Yorkshire, the puddings are eaten with an onion gravy. He also said “you can bake some sausages then pour the batter over them. For some reason that’s called toad-in-the-hole.” But that’s another recipe for another column. This week, I’m sharing four different Popover/Yorkshire Pudding recipes. The Basic Popovers recipe is from the New York Times Cookbook. The second recipe is Brad’s and is a great example of a true Yorkshire Pudding. The Huge Popovers recipe is my creation and has a few caveats. It’s a bit more time consuming, but totally worth it. The final cheddar and jalapeno recipe is not what I would call a true Popover. They don’t rise as high as real Popovers but were just too yummy not to include. Personally, I think that the weight of the cheese probably keeps them from rising as high – that’s just my unscientific opinion. By-the-way, I had always been told that you should always eat popovers immediately. That’s not true. They’re very good reheated. I like mine with butter and fruit preserves. Happy popping! 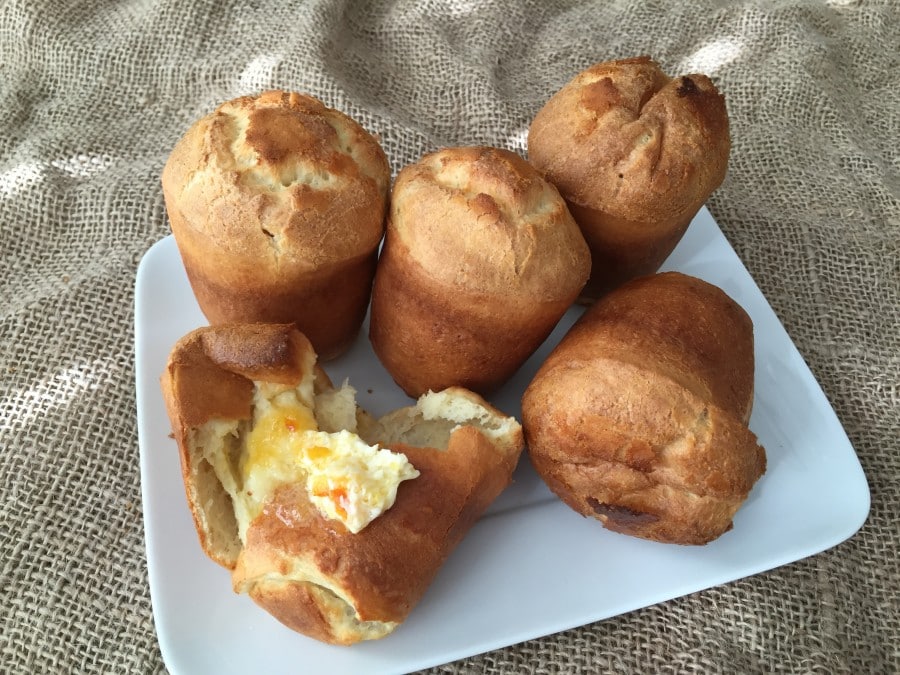 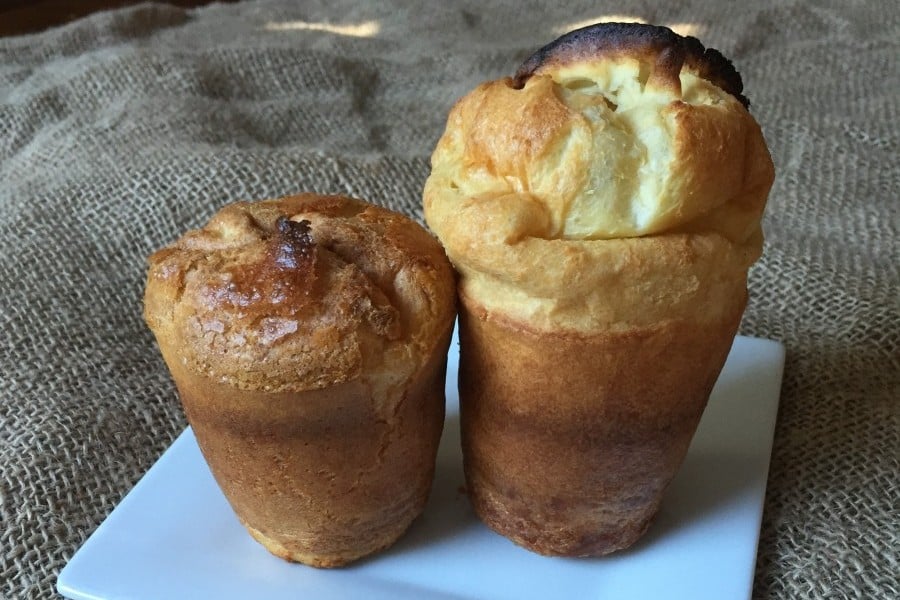 Bradwin’s Yorkshire Puddings
This recipe is for six popovers. It is easy to double or triple; however, if using a six cup pan, let the pan cool and re-spray the cups with nonstick cooking spray between batches and follow recipe again.
2 tablespoons unsalted butter, melted
3 eggs, lightly beaten
1 cup milk
1 cup all-purpose flour
Pinch of salt
Preheat oven to 450 degrees. Spray cups of popover pan with non-stick cooking spray. Put ½ teaspoon melted butter into cups. (If serving with a beef or lamb roast, use the drippings instead of the melted butter in each cup.) Whisk the milk and eggs together and then add remaining tablespoon of melted butter. Combine the flour and salt in a large bowl, and then add the milk and egg mixture. Set your timer for 2 minutes and whisk the mixture with passion! Mix until smooth and your arm is worn out! It’s Important that you mix well! Fill the popover cups with the batter about 2/3 full. Bake for 20 minutes at 450 degrees and then reduce oven temperature to 325 degrees and continue baking for 15 minutes. Do not open the oven door during entire baking time. Makes 6. 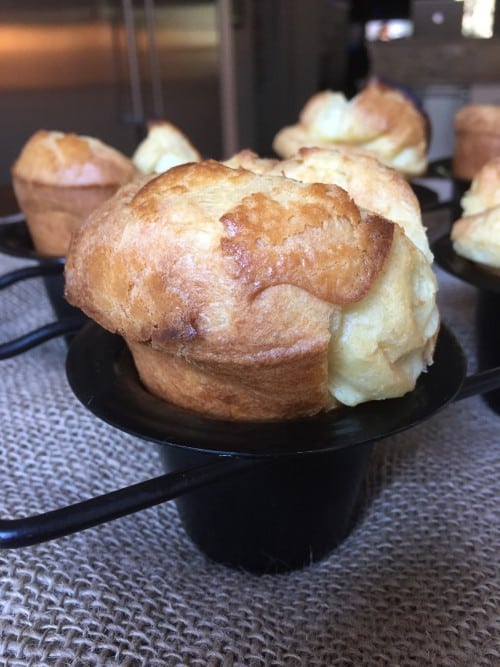 Huge Popovers
1 cup milk, at room temperature
1 cup all-purpose flour
3 large eggs, at room temperature
¼ teaspoon salt
2 tablespoons cold butter
Place milk, flour, eggs and salt in a blender. It’s important that the eggs and milk and not cold. If needed, warm the milk for about 30 seconds in the microwave. Blend all ingredients until the batter is very smooth. Let the batter rest for 15 to 20 minutes. Place oven rack in the center of oven. Preheat oven to 450 degrees. Spray popover pan with cooking spray. Place popover pan on a baking sheet. Place 1 teaspoon of cold butter in each cup of the popover pan. Place pan on baking sheet in hot oven for 1 to 2 minutes, just long enough to melt the butter. Do not stir the batter. Evenly divide the batter into the prepared pan. Each cup should be filled approximately halfway. Bake for 20 minutes until puffed and golden brown. Reduce heat to 350 degrees and continue baking for 10 more minutes until crispy. Do not open the oven door during baking. Serve warm. Serves 6. 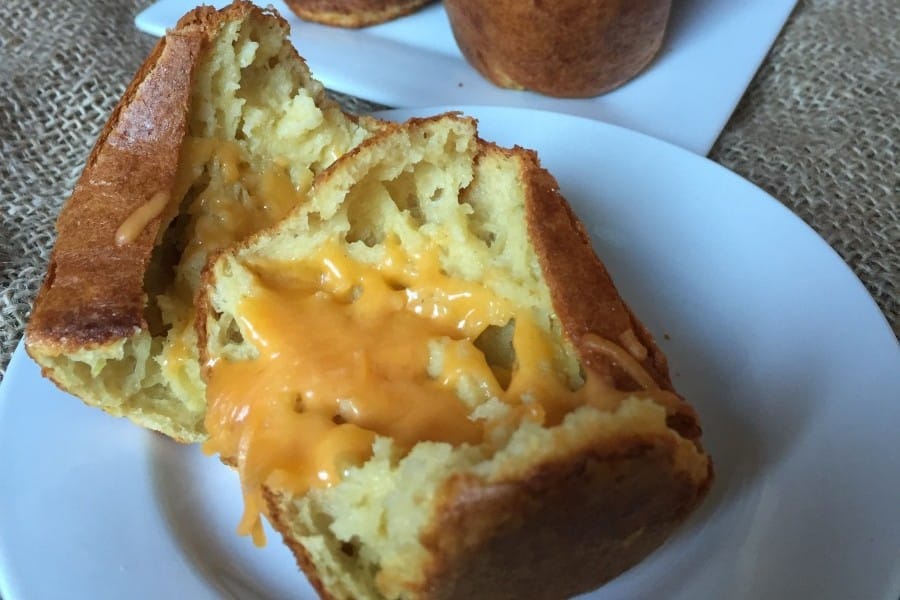 Savory Cheese and Jalapeno Popovers
1 cup all-purpose flour
1 cup milk
2 eggs
¼ teaspoon salt
½ cup shredded sharp cheddar cheese
1 tablespoon finely diced jalapeno
Combine all ingredients in a blender. Blend until well mixed. Let mixture rest for 15 minutes. Preheat oven to 425 degrees. Spray a popover pan with cooking spray. Place popover pan on a baking sheet. Place pan in oven to heat for 3 to 5 minutes. Give the rested batter a quick blend to combine any ingredients that may have settled to the bottom of the blender. Divide the batter evenly in prepared hot popover pan. Bake in preheated oven for 35 minutes. Turn off oven and leave popovers in for 7 minutes more. Do not open oven door. Serve hot. Serves 6.